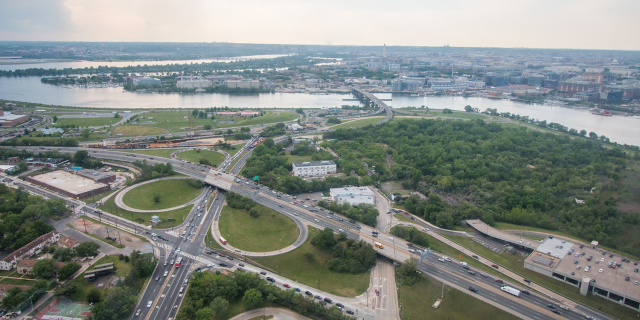 Mayor Muriel Bowser broke ground on construction of the new Frederick Douglass Memorial Bridge on February 13. The new Frederick Douglass Memorial Bridge is the largest facet of the District Department of Transportation’s (DDOT) South Capitol Street Corridor Project, the largest public infrastructure project in the history of the agency. It’s also the biggest step that DDOT is taking to improve the District’s bridge network, which has a far smaller percentage of structurally deficient bridges than the nation as a whole.

In a recent analysis of the US Department of Transportation’s (USDOT) 2017 National Bridge Inventory database, the American Road and Transportation Builders Association (ARTBA) found that 11.3 percent of bridges (54,259 out of 612,677) in the nation are rated structurally deficient. By comparison, 2.39 percent (5 out of 209) of bridges that are maintained by DDOT in the District received the same designation. (Three other bridges in the District that were rated structurally deficient fall under federal jurisdiction.) 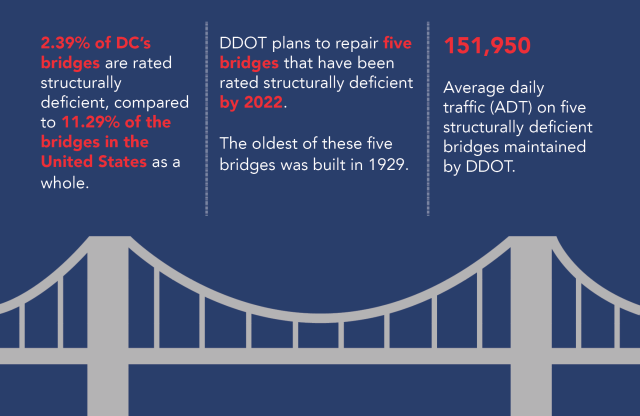 The South Capitol Street Corridor Project also includes the reconstruction of the I-295 (Anacostia Freeway) Bridge over Suitland Parkway, one of five bridges maintained by DDOT that is categorized as structurally deficient. The bridge, which was built in 1964, carries over 80,000 vehicles each day. Construction is scheduled to start this Spring and last until in December 2021.

DDOT knows that doing better than average isn’t enough when it comes to the structural integrity of our infrastructure so it also has plans to repair the other four structurally deficient bridges in the next four years:

For a more detailed, map-centric look into DDOT’s plans to repair structurally deficient bridges in the District, please visit a Story Map on the topic.

The District Department of Transportation (DDOT) develops and maintains for the District of Columbia a cohesive sustainable transportation system that delivers safe, affordable, and convenient ways to move people and goods - while protecting and enhancing the natural, environmental and cultural resources of the District.
View all posts by DDOT Blogger →
This entry was posted in Bridges, General, Infrastructure Repair, Transit, Uncategorized. Bookmark the permalink.

This site uses Akismet to reduce spam. Learn how your comment data is processed.