A DDOT crew plants an American hornbeam tree on the 1700 block of 30th Street SE.

On a crisp October day a DDOT team was planting an American hornbeam tree (Carpinus caroliniana) on the 1700 block of 30th Street SE. The tree, when fully grown, could reach almost 50 feet high – just high enough to peer out from its new home in the District’s Randle Highlands neighborhood onto a city that is greener than ever, and expanding its tree canopy at a feverish clip.

Starting in FY 2017, DDOT has planted more than 8,000 trees annually, which is more than twice as many trees as it averaged from FY 10-13. The agency is accomplishing this at a rapid pace: it is planting around 100 trees per day this tree planting season, which started on October 1. 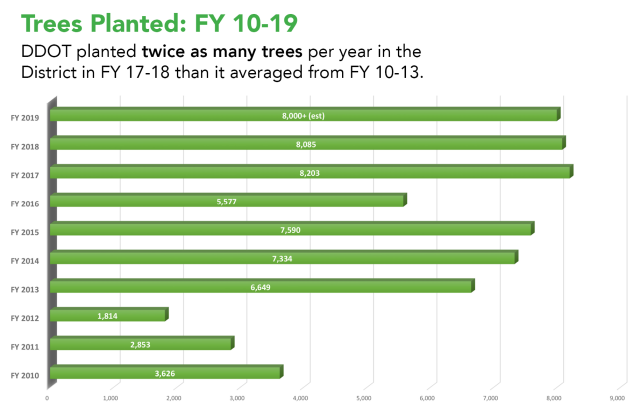 Aside from its breakneck efforts in adding street trees around the District, over the past few years DDOT has helped to expand the city’s tree canopy by taking on the responsibility of planting new trees in the District-owned land, such as parks and schools. Starting in late 2016, DDOT was charged with planting and maintaining trees in District-controlled parks and schools. During the 2017 tree planting season, DDOT planted 370 trees at such locations. 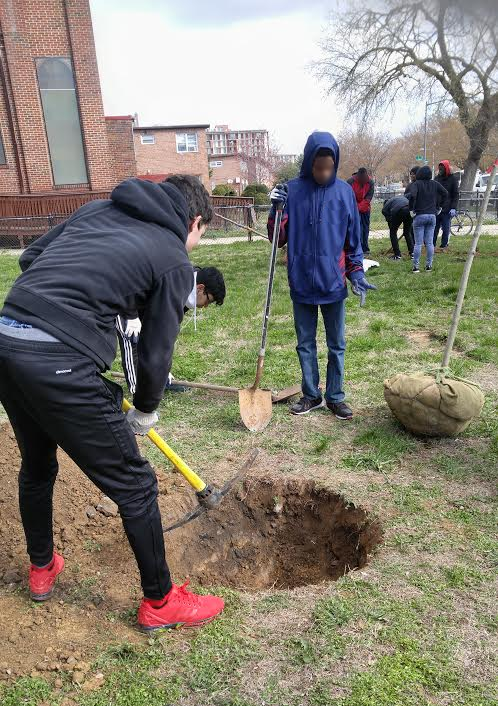 Taking on the stewardship of trees beyond the scope of what DDOT has traditionally overseen, namely trees in the public right-of-way, is more than a set of new obligations that the agency is happy to take on. It might open up much-needed real estate on which to plant new trees, and grow out a healthier, greener DC.

The District Department of Transportation (DDOT) develops and maintains for the District of Columbia a cohesive sustainable transportation system that delivers safe, affordable, and convenient ways to move people and goods - while protecting and enhancing the natural, environmental and cultural resources of the District.
View all posts by DDOT Blogger →
This entry was posted in Uncategorized. Bookmark the permalink.

This site uses Akismet to reduce spam. Learn how your comment data is processed.